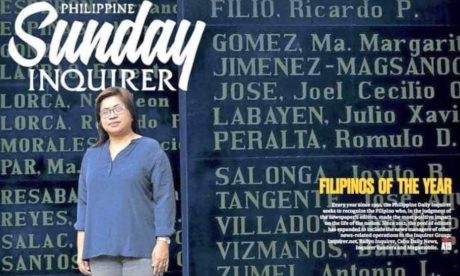 There's the phrase "Tatak Pinoy" (Trademark Pinoy) or "Ang Galing Ng Pinoy" (How good or great is the Pinoy) which can be true or false depending on circumstances. This is the real issue now is the crowning of Jover Laurio as Filipino of the year can put every single Filipino in hot water. With that case, it should be a shame to give positive Tagalog phrases with the word Pinoy attached to her. It's because there's a difference between the Pinoy and the PNoy. She's not a source of Pinoy Pride but PNoy Pride. Every decent Pinoy would be ashamed of her.

I tried reading through Pinoy Ako Blog (PNoy Ako Blog) and it's really substandard and anti-intellectual yet Ateneo De Manila University awarded her for it. This shows what's wrong with the 31 years years after EDSA Revolution. The Philippines has been left with more problems than what the Marcos Regime left behind. They could have taken the good out of Marcos and throw away the bad. Instead, they decided to dismiss everything done by Marcos as evil. I guess Italians today should throw away every achievement done by Julius Caesar if that's the case.

Here's what Filipino-Chinese DDS Blogger Krizette Laureta Chu had to say and I took this from GRPundit:

I am so sorry that some editors we looked up to are so hellbent on destroying the credibility of the administration and its supporters they don't care for their own credibility, throwing their support blindly behind a person as shady and as dubious as Laurio.

The fight is no longer against fake news, because fake news is easily verifiable--it's against biased news that serves the interest of a select group of powerful people. It's against slanted news that chooses to highlight some facts and hides others to present a chosen, curated, self serving view.

The 90 percent who are real partners for change, they are the Filipinos of the year. (So you can go shave your back now.)

How is PNoy Ako blog really that  substandard? I don't claim to be on top either of the line either but I could say substandard in terms in other areas. I usually react to whatever I read and share my thoughts. On the other hand, Pinoy Ako Blog is so anti-intellectual by just looking at this shot where I borrowed it from GRPundit: 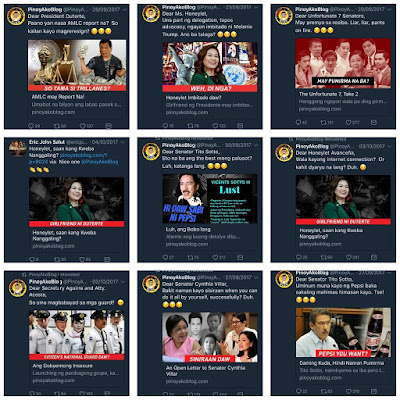 It's nothing more than emotional outbursts and childish pranks. If I'm to speak in Tagalog, I'd be saying, "Sa paninira lang ng ibang tao lang magaling!" or "They're only good in ruining other people!" There's nothing intellectual about it. It may have a classy design but it's Smokey Mountain in substance. The same goes for others like #ChangeScamming, #SilentNoMorePH, #ResbakOperatives and #SilentMajority to name more who accompany all the destabilization propaganda.

This is the reality that we're to face right now. Do you ever notice that most of the time it's those who are "puro walang alam" (those who know nothing) are usually the noisiest? It's the Dunning-Kruger effect and the truth is that stupid people tend to think they're so smart for a variety of reasons. One of them may be that it's because they had high academic achievements in difficult to enter schools (plus, they didn't pay for their degrees but worked hard for it) or for the undereducated they think that they're too cool for school. I don't know what to think about Laurio right now since it's possible she probably has high education attainment. But even if she has, it doesn't change the fact she's really that stupid.
Pinoy Ako Blog PNoy Pride Pwede Na Yan