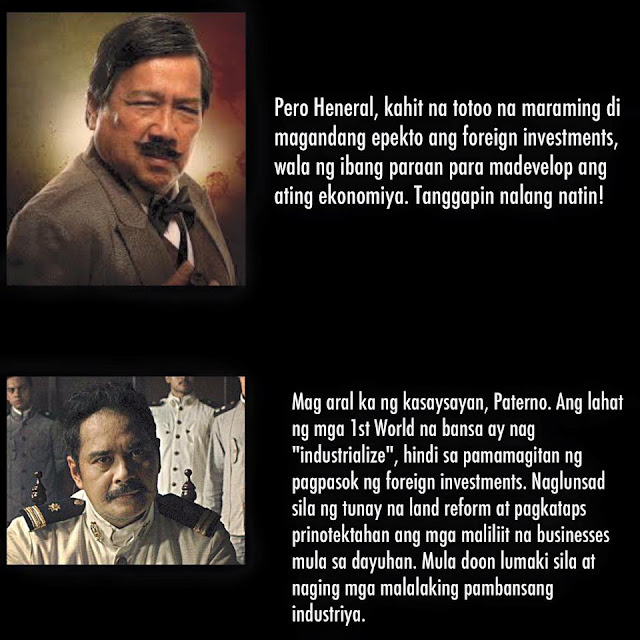 Translating the words of Heneral Antonio Lunatic (a name I made for a person who uses the name "Heneral Antonio Luna" but he's saying the dumbest things which the real and actual person NEVER said) should first test the validity of his statement which says, "You study history, Paterno. All the first world countries became industrialized not through foreign investments. They forwarded true land reforms then they protected the small businesses from the foreigners. From that they expanded and became a huge national industry." All that was hypocritically said while being on social media which are all American-made. Oh the hypocrisy of the anti-progress crowd.

The whole idea is ridiculous for several reasons. If you restudy Filipino history, you can see that the nation did not industrialize by itself. Even before colonization, Filipinos or at least those living in the archipelago already traded with foreigners before they were named Filipinos. Then Filipino culture started to move forward with Spanish colonization, the archipelago got named after King Philip of Spain, and later Filipino culture evolved as a result of American occupation. When I eat Filipino food, I always remember that the food I'm eating was influenced by foreign culture. When I'm using some Filipino-made products, I always remember that imported machinery were used in making them. I just wonder where in the world does Heneral Antonio Lunatic get his ridiculous idea that first world countries became industrialized not by foreign investments and just through "land reform"? I really dare him to look for other sources other than biased sources like DepEd History Books.

My bigger challenge to the "Dakilang Heneral" (Great General) himself is to actually test his ideology on an uncharted island of his choice. Remember the words UNCHARTED ISLAND. He says, "The 1st world countries didn't get industrialized by accepting foreign investments but by land reform." This claim is questionable because if he looks at the 1st world countries, they got industrialized with a healthy amount of foreign investment aside from land reform. Singapore went from the third world to the first world by Lee Kwan Yew's reforms that involved economic liberalization. Imperial Japan became more progressive not during the Tokugawa era but during the Meiji era. China became a progressive country, not during Mao Zedong's economic restrictionist regime but when Deng Xiaoping opened China to the world. So if Heneral Lunatic wants to conveniently ignore those facts, he should test his ideology in an uncharted island with nothing but the island to industrialize. He should not receive any foreign help whatsoever because he said it after all that the 1st world nations industrialized not through foreign investments but their own land reforms. So the question is, how can he industrialize it without foreign investments and just the local resources on that island?

The uncharted island should prove a challenge though considering there might be nothing more than trees and nature itself. But I guess Heneral Lunatic has been too used to the convenience of modern men to even test that theory. I mean, why is he on the Internet which was not invented by Filipinos? His personal computer is guaranteed to be not of Filipino brand, he might even be using smartphones and whatever proving he's a real hypocrite because he hates progress while using the fruits of it. If he wants to prove his theory true then he should go to that island renouncing all things foreign with all who wish to follow him. But the question is, how long will his ideology last in that uncharted island? Let's wait and see.
economics Failipino Pride foreign investment