The Stupidity of Boycotting Everything "Made in Tsina" 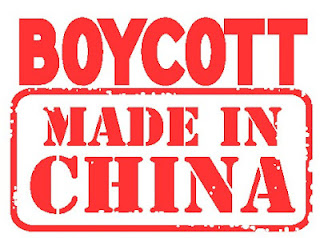 I have noticed how the recent China/Philippines conflict over Spratlys/Huangyan had caused something as stupid as, "Boycott Products Made in China".  I do admit that there are many goods from China that are poisonous and fake but... do you know why those goods EASILY slip into the Philippines?  You can thank careless customs like Stinky Soliman of the Department of Social Welfare and Development (DSWD) or the irresponsibility of the Department of Foreign Affairs.  Heck, you might even expect Stinky to be ordering fake rice from Chinese counterfeit rice makers for all you know.  Maybe, just maybe, some of the corrupt customs officials are protecting Chinese drug dealers in the Philippines... as long as they pay money under the table.  At the same time, take not that the Chinese government is NOT using fake food products nor endorsing them... learn that lesson when they executed Zheng Xiaoyu for the melamine milk scandal last 2008!

Now here's the problem of boycotting everything "Made in Tsina".  I thought of the fact that most products today may not be of a Chinese brand but many of them are assembled in China.  Do you know a lot of Smart Phones are made in China as well?  It would be stupid to open up every Smart Phone around just to make sure they aren't "Made in Tsina".  In my case, mine is made in Vietnam and for my friends, some of theirs were made in Tsina.  Maybe some of your locally made plastic tubs (planggana in Filipino) or water scoop (kabo) may be made in the Philippines but the plastic is "Made in Tsina".  In short, a lot of products are really "Made in Tsina" where they be safe or dangerous.  It's also stupid to assume that anything made in Tsina or Philippines is already of inferior quality.  Oh boy, has China become the new convenient scapegoat of the Philippines?

What may also be stupid with some Filipinos (who I call as "Failipinos" because they are failures) with their "Boycott Everything Made in Tsina" propaganda can be so stupid because as said, are they sure that any products they are using are not "Made in Tsina".  I thought of the typical scenario that might be happening.  I hate Tsina, I hate Tsinoys. I hate Chinese... and insert reason never mind that the Philippines has become a paradise for drug dealers no thanks to the stupidity of our authorities who are too relaxed on crime and the stupid Commission on Human Rights.  Do they even realize that Chinese criminals end up hiding in the Philippines because if they did their dirty trade in China, they would inevitably face their government's chopping board?  But here in the Philippines, it's certainly more fun for those who believe in a culture of impunity.

What is funnier and more self-contradictory is that they are ranting about China while their products are usually "Made in Tsina".  The smartphones or tablets they are using may not be of Chinese brand but they were most likely assembled in Tsina... the very same gadgets they use to rant how much they hate China are "Made in Tsina".  Maybe they are watching their favorite telebasura saying, "I would never watch any telenovela made in China." while the TV set was made in Tsina.  They might be murmuring about the heat and how China made it worse, but the electric fan or air conditioner was made in China.  Oh wow... should I mention what if they were eating Chinese food while murmuring about China?

So what do the Chinese owned private firms and joint ventures who do legitimate business have to do with Chinese government bullying the Philippines or a possible Communist takeover?  It's just like this - did the Chinese government blame President Nobita Aquino for the three drug mules they killed and call for a boycott of Filipino products in China?  Absolutely not!  Also, do the Chinese owned private firms and joint ventures DO NOT finance the military in a huge scale.  At the same time, if you must boycott anything "Made in Tsina", make sure you are boycotting it not because of its country of origin but because it's fake, defective, dangerous, etc.   There are good products that are made in Tsina, as said boycott only the bad products made in Tsina.  Again, when will those stupid activists realize that it's virtually impossible to boycott everything made in Tsina?
China Failipino activists Failipino Pride