The Philippines Has Become A Paradise For Drug Dealers! 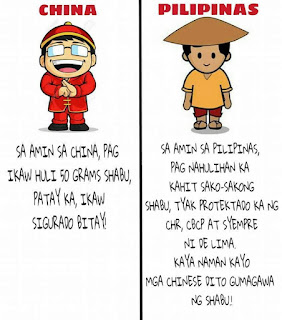 It can be observed that a lot of executed drug carriers include a good number of Filipinos. In China, just how many more Filipinos are included in the chopping board in the war against drugs? It's time to see the truth of another issue that may answer why so many drug convicts in the chopping board in other countries are Filipino sad to say. As much as they deserve it, I don't take pleasure in it. Every decent Filipino would just say, "If you do the crime, you do the time!"

I am still disturbed to how the Philippines may have become a paradise for illegal Chinese (many of them are powerful crimelords hiding from China's law) while China becomes the "convenient scapegoat" for the Failipinos to make an excuse to why their countrymen are getting executed abroad. It's annoying to how the population of the Philippines have people CHOOSING to become Failipinos than to become enlightened Filipinos. This is a real sad reality and it's time to see how the country has become as of late. If one can observe, many of the drug recruiters are actually illegal Chinese. Again, don't blame China, blame the Chinese who are involved in the drug industry only. If those people read the news, China is NOT only executing Filipino drug mules but ANYBODY whose drug-related offenses are worthy of death. Not that I condone China's brutality but still, it's sad to think why the Philippines as a democracy isn't doing its job and a Communist country has become more moral in some ways.

Failipinos cannot just keep using China as the scapegoat for all the Filipinos' plights (including the ErgoCha incident). Illegal Chinese have an easier time hiding in the Philippines because of corrupt customs that they can just buy some illegal protection together with loose law enforcement (and a LOT of wealthy criminals are usually getting away with what they do) and not to mention the so-called Commission on Human Rights (which just keeps defending criminal rights instead) becomes an ideal territory to do their dangerous drug trade. If those Chinese drug dealers would do their business in China, they might consider falling in line together with every other sleazy dealer. After all, Chinese law enforcement didn't spare Zheng Xiaoyu from the chopping board after the melamine incident last 2008 and they wouldn't do the same for Chinese drug manufacturers. To say that China never executes them and that their Communist government is the importer is an utterly ridiculous lie! They always use their range of excuses to make themselves look innocent. But take note that while most of the drug dealers are Chinese, there are also other drug dealers within the Philippines, from Japan, Mexico and other parts of the world willing to use the Philippines as one of their extended territories.

However it does not stop with just illegal protection as a lot of people in the Philippines have become a fertile ground for recruitment of their cause. With the common knowledge that a majority of OFW families remain poor in spite of huge salaries abroad, it's a fertile ground for recruitment. What can be observed is that there are more Overseas Failipino Workers than there are Overseas Filipino Workers with a plan. They can easily swindle willing Failipinos who would choose to remain as Failipinos than to become a decent Filipino. Failipinos seek to get a quick buck to support their expensive lifestyle which one way or another, is hard to sustain with the OFW lifestyle. Even if Singapore's salary is pretty much high for a domestic helper ranging from PHP 13,035.95 to PHP 16,294.93, it's not enough because they want the latest. They want the VIP ticket to any concert, they think they must get everything ROYALTY and becoming a drug mule is a much easier way to go. Such people would make the excellent willing drug mules to do the dirty work while these big time drug dealers enjoy their illegal protection (and deportation protection is granted for illegal migrants), swim in the pool, drink mango shake while their drug mules are willfully at risk thanks to stupid law enforcement, Etta Rosales, corrupt customs and lazy Failipinos.

If I'm to talk about how to combat drug dealing involves these methods. Again, open up the economy and there will be more legitimate employers and the drug lords would be overshadowed. Then again, an open economy is not enough unless there is real law enforcement. I highly suggest it's time to return the death penalty this time by firing squad. One may consider how Indonesia's strict anti-drug policy has actually helped the country's peace and order. In fact, I would salute President Widodo for not receiving the pleads from the Malacanang Palace for the release of Mary Jane Veloso. Likewise, the Philippines should really have a real war on drugs regardless who is going to be executed. I don't care if the next drug dealer to be shot is Chinese, that person should get the sentence for a heinous crime against people.
drug dealing Failipino Pride issues politics