The Failipino Ultranationalists are the Pinoy Nazis of the Philippines! 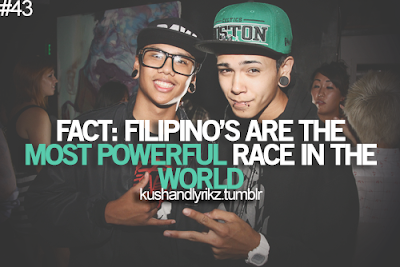 If one remembers World War 2 in their world history lectures, remember that Adolf Hitler was known to launch his campaign for "racial purity". He had his problems with the Jews because it was said he lost his desire to be an artist to a Jew. Rather than accept that he wasn't meant for art but for military, he decided to wipe out the Jews and that bitter pride of Hitler got the best of him. Today the Philippines has the FLIPFAG Party who may also be termed as Pinoy Nazis or bad Pinoys. Please note that I'll be using the term Pinoy from this point onward as a neutral term while the term Pinoy Pridist or Flipfag will be the term for a bad Pinoy.

For the Failipino ultranationalist, they are the greatest race in the world. They are obsessed with maintaining the "pure blood "Filipino and that the Philippines is only for Pinoys (a term that is seldom used in a neutral manner to describe who are more or less "native" Filipinos) never mind that anthropology says that Filipinos are descendants of Malays and Indonesians during the native times, and two, got mixed with Spanish and even CHINESE descent for some areas. If Hitler was obsessed about white superiority, the Failipino is obsessed with brown superiority never mind that brown is not a Filipino-only exclusive color. Check out almost every Asian country, brown is a very common skin color in Asia. For them, since they are the greatest in the world then everything is for the Pinoy. For them, brown is the best color of skin. That is stupid. If I were to say, I personally think black is the best skin quality because it is the least prone to skin damage. While I may not find black attractive (okay that's just attraction, I still respect blacks as people) compared to brown, yellow or white but, you cannot deny that black skin has the strongest amount of melanin from all skin colors.

What basis does the Failipino ultranationalist have in their own version of Nazism? They would brag about the greatness of their obviously mediocre industry. Take a look at the products and services. One Philippine-made film after the other is Failipino in quality, not Filipino in quality. Many products are produced so bad they can't reach export standard. Yet they gloat about some Pinoy products that make it great abroad. Every time a Pinoy makes it big, they free ride on him/her,never mind they scorned the successful Pinoys before the success (balimbing culture). But the problem for these Failipino Nazis is always the same. They are FREE RIDING on successful Pinoys abroad. While the term Pinoy now may be used in a neutral manner, the term Failipino can be equated to being a bad Pinoy or a Pinoy Nazi. They would also gloat about how Pinoys are the greatest and are more than ready to discriminate other races. They play the victim card of how the whites oppressed them, blah blah blah... while hypocritically eating at KFC or McDonalds for a quick meal. For the Failipino Nazi, everything is just all about the Pinoy being the greatest race and that no Pinoy is not great.

So here's one thing I tend to observe about the Failipino Nazi. They are very good with their racist jokes and offensive humor but let it backfire, they react like as of its the end of the world. When they are asked the questions like, "If Pinoys are the best in the world, why is the Philippines hardly moving forward except in a few areas?" Then like the Nazis, they do have their convenient scapegoat. Their convenient scapegoat will always come in the form of foreign investors (so that's why they hate the idea of uplifting 60/40 in favor of 50/50 and up) and the Filipino-Chinese. Some of them also keep blaming the Filipino-Chinese as the reason why some Pinoys is poor and oppressed, never mind that some of them are lazy and refuse to go to work. So they favor the welfare state that rewards the lazy and punishes the diligent with ridiculously high amount of taxes.

Being Chinese by descent, I have experienced what it was like to be under the ridicule of these Failipino Nazis. In fact, some of them even wished that all the Filipino-Chinese will be kidnapped and killed so the nation can move forward. I remembered how often more times than not that it's easy to hear the words, "Hilaw! Hilaw!" which is the Tagalog word for raw on my ears from Pinoy pridists. They brag about their brown skin, as if the Filipino is the only one with brown skin. At the same time, it's amazing to see how hypocritically they enjoy Jollibee which is ran by Filipino-CHINESE businessman Tony Tancaktiong, or how often they eat Filipino food ran by Filipino-CHINESE businessmen. What they don't even realize is that a lot of Filipino export quality products ran by some competent Filipino-Chinese businessmen.

And the worse part of the Failipino Nazis is how they are actually with their Kapatid, Kamag-anak, Kabayan code. They are actually oppressors whether they want to acknowledge it or not. You MUST support your fellow Pinoy even if he or she doesn't deserve it. You must take pride in the Pinoy in the sports arena even if it's obvious that Pinoy lost fair and square. You must NEVER criticize the poor quality of anything Pinoy, treat all Pinoy products equal whether bad or not, or be deemed treasonous. One can just think, is it any wonder why FLIPFAG means Failipinos Loving Incompetence/Ignorance Perpetually/Purposely For All Generations? It might be time to exile them to an uncharted island, let them start their own nation and let them rot in there with their own brand of WILLFUL STUPIDITY!
Failipino activists Failipino Pride issues