Hating The Oligarchy But Loving Economic Protectionism Makes No Sense 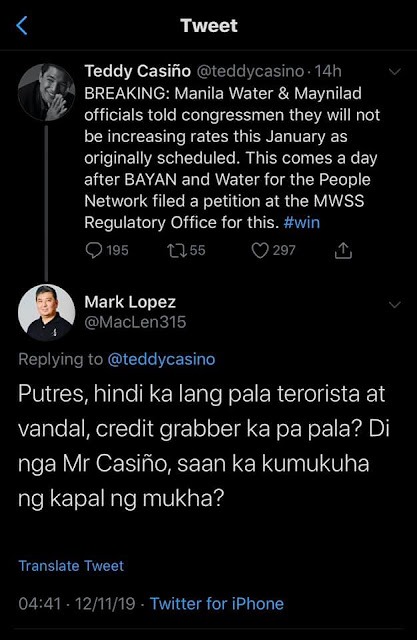 Above is a picture from Toady Casino (Teddy actually) and Mark Lopez. I really agree with Mark calling Toady a thick-faced credit grabber. Now, this should encourage me to write exposing the hypocrisy of these Filipino communists or just communism in general. Right now, I see those Filipino communists hate the oligarchy (such as that now-empty Fliptards blog) and rant all types of anti-capitalism garbage. However, they are seen to be walking contradictions because they hate capitalism but love its products. Worse, they're trying to promote economic protectionism with the use of IMPORTED PRODUCTS.

I remembered seeing rallies going against local Filipino-owned businesses. A recent example has to be that of Regent Foods in Pasig. Vico Sotto should have not taken sides with those labor unions. If Regent Foods was indeed guilty they, by all means, do appropriate action! However, siding with leftist labor unions is just stupid. I always like to ask what good did those anti-capitalist activists ever do? Do they provide REAL STABLE JOBS and do they provide the FUNDS needed to pay for environmental clean-up? I really think of how Greta Thunberg's tantrum screaming against the dream of endless economic growth is something. I wonder did the people behind Greta even consider that economic growth is also necessary to pay for cleaning up the environment? What's the use of collecting garbage if you can't find ways to dispose of it properly due to a lack of economic growth? In short, if those activists can't produce stable jobs then they should just STFU because socialism has been shown to FAIL. Read the history of North Korea, China under Mao Zedong, and Venezuela and see how socialism enriched those in power while leaving the rest of the people poor.

I remembered Toady's CRappler article where he inadvertently showed for the nth time just how stupid he is. He even has insisted that the 60-40 rule must be kept. I remembered writing a refute against it but the guy is a plain credentialist. It's a real tyranny indeed when mass media wants to silence nobody bloggers like myself. I think some of those Anonymous trolls who demand nobody bloggers reveal themselves are probably paid by the mass media. People will just tell me to STFU just because I'm no economist or I'm just a nobody. Again, isn't it part of the poor Filipino logic to attack people first to discredit the argument rather than to focus on the argument first? I may have just taken a total of 12 economic units in college (undergrad, graduate school) but that has provided me the BASIC KNOWLEDGE to refute nonsense like those of Bayad Muna.

I really love bringing up Adolf Hitler now as if I adore him a lot now, don't I? Except that I bring him up to further demonize the socialists by comparing them to Nazis. Hitler's anti-Jewish campaign significantly ruined Germany's economy. Hitler started getting the wealth and assets of the Jews. The massacre against Jewish people and closing down their businesses killed the geese that laid the golden egg. Killing the goose that laid the golden egg stopped golden eggs from being produced. The Jewish businesses were geese that laid golden eggs. Hitler's anti-Jewish campaign significantly brought Germany to further ruin. The activists' desire to overthrow the oligarchy WITHOUT opening up the Philippines to foreign investors is suicide. Let's say that they succeeded in getting rid of the Filipino elite regardless of ethnicity. Let's say they managed to shut down big Filipino businesses as oppressors because capitalism is supposedly "evil". All they will do is have a one-day windfall with seizing the money but there will be no continuous supply of money. It would be just like Hitler's anti-Jewish campaign only seized wealth present without accounting for continuous wealth generation.

What brought the oligarchy their power in the first place? It's the excessive restrictions on foreign investments. What's the use of hating the Marcoses if you support economic protectionism? You can outlaw the Marcoses (or in extent, the Aquinos too) but what could will that do if the Philippines REMAINS a protectionist state that's in the danger of becoming like Venezuela and North Korea? The oligarchs are able to amass wealth while the rich become richer and the poor become poorer not because of capitalism but because of COMMERCIALISM. Those idiot activists can't even differentiate capitalism from commercialism. Again, capitalism is all about emphasis on private ownership of businesses in a free market to fill the supply-demand gap. Commercialism is all about caring about profit and nothing more. LEARN THE DIFFERENCE! Communism hasn't done a better job in closing the rich-poor gap either. Its only success is to make those in power richer. Just think Mao Zedong was very fat while the rest of China starved. Nicolas Maduro enjoys fine steaks while Venezuela starved. Communism is but a crony capitalism dictatorship repackaged in the guise of welfare. Then again, I wonder if we're all probably stuck with Filipino communists just pretending to hate the oligarchy but secretly receive money from them?
business economics Failipino activists