Pinklawans' Refusal To SHIFT TO PARLIAMENTARY Became Their Undoing 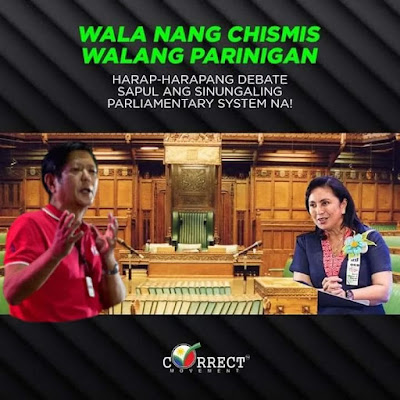 I guess there's MUCH HYSTERIA by the Pinklawans right now as Bobong Marcos led against Leni Loud Robredo. I wonder if Leni Loud was really the vice president from 2016 to 2022? A bit of historical study would tell us how the Yellowtards turned Pinklawans refused to shift to the parliamentary system. Raissa Espinosa-Robles herself even raised the fear that Bobong will become prime minister. Besides, several misconceptions about the Marcoses have become a huge stumblingblock AGAINST constitutional reform. The whole Marcos scare may have done the opposite if ever Bobong will become the 17th president. I'm no supporter of Bobong anymore. However, I'm no supporter of Leni Loud either.

The big fat lie about the Marcoses (aside from the fact that the Marcos Years were the Golden Years) is that the Marcos Years were PARLIAMENTARY. If Pinklawans just listened (or analyzed) the speech of the late Ninoy Aquino - they'll find out that the so-called Parliament of the late Ferdinand E. Marcos Sr. is no parliament. Ninoy blasted it out as a mockery one way or another. The last Lee Kuan Yew refused to even acknowledge that the late Cesar Virata was truly a prime minister. Virata was PICKED by Marcos. A parliamentary system has the people elect the party which has already elected its prime minister. It's like voting for Uniteam for Bobong and Liberal Party for Leni Loud. The people still elect the prime minister but according to party votation. You vote for the party which carries your desired prime minister.

The Pinklawans' undoing (back when they were Dilawans) was in 2016. Mar Roxas ran under the Liberal Party campaign. Outgoing President Rodrigo R. Duterte ran under PDP-Laban. The Dilawans wanted to hold Duterte accountable. However, the Dilawans NEVER had the chance to become a real formal opposition which would've been different if it were a parliamentary form of government. If PDP-Laban won with Duterte as prime minister then Roxas (if ever the late Noynoy Aquino doesn't want to rerun as prime minister) could've been the Opposition Leader. Duterte and Roxas would've been duking each other out at the weekly question hour. Instead, there was NONE that really can explain the lapses done during this outgoing administration.

Did the Yellows turn Pinks learn their lesson? Sadly not. They should've pushed for a parliamentary system since they wanted to hold Duterte DIRECTLY accountable. Instead, it was all but theatrical show business. True, it will require reshuffling meaning elections need to be held before 2022 to get a prime minister. Maybe, Duterte has to rerun under PDP-Laban and Roxas (or Noynoy) under Liberal Party. PDP-Laban becomes the government and the Liberal Party becomes the Opposition. It would mean that Duterte and Roxas will be counterparts to each other. Aguinaldo will have to settle for the position of Shadow Minister of Audit. Aguinaldo will be tasked with questioning whoever Duterte's Minister of Audit will be. Each minister will have a corresponding minister. Instead, the Yellows turned Pinks were too focused on celebrity-style politics.

A good example of abundant celebrity-endorsed politics is Leni Loud's campaign. A lot of pretty faces were involved such as Catriona Eloisa Magnayon Gray and Shaina Garcia Magdayao to name a few. I even laughed at Leni Loud's "coronation". Leni Loud could've focused on shifting to parliamentary system before elections. Maybe, it would be beneficial to move elections to next month as the Philippine Parliamentary is formed. The parties involved will file their candidacy as a TEAM. Bobong will have UNITEAM and Leni Loud will have the Liberal Party. People will elect their candidates such as UNITEAM for Bobong or Liberal Party for Leni Loud. What happens is that these votes will determine which party becomes the majority and which party becomes the minority.

If ever Bobong wins then Leni Loud will represent the losing Pinklawans. It's not a winner takes all scenario. Instead, Leni Loud becomes the voice of the Pinklawans in the Parliament. The Pinklawans' wish to hold Bobong accountable? The Philippine Parliament will give that room. Bobong will be held accountable every week by the Kulay Rosas Opposition. The Kulay Rosas Opposition will have corresponding ministers to counter Bobong's ministers. If only the Pinklawans thought it better. Their lack of long-term thinking and obsession with personality-based politics proved to be their undoing.