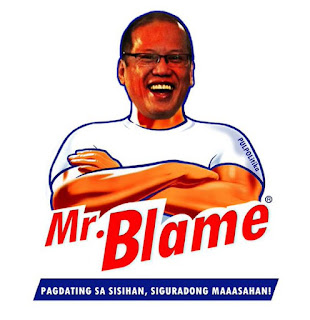 It's no secret that even before the PNoy Pride Administration, it's already a problem that many Filipinos love to play the blame game for their losses. Even before Noynoy kept blaming others many Filipinos tend to blame other people for their losses. I can't forget some ridiculous excuses that can be made like it's the fault of the other team because their arm pits smelled bad that's why they lost or they blame the judges instead of themselves when the loss was clearly their fault. Maybe you can also remember the story of Juan Tamad where he blamed the crabs instead of himself that the crabs didn't reach home. It's really an excuse to keep living according to the blame others for your misery, isn't it?


Let's take a good look at blaming for their country's conditions. While it's difficult to generalize but there's a lot of statements to why they say that the Philippines isn't doing good. We have ultranationalistic Filipinos who blame foreigners for everything. Want to blame why the Philippines is in a mess? Blame foreigners. Want to blame somebody for the ongoing drug menace? Blame all the Chinese and China never mind that those Chinese crooks got into the Philippines no thanks to irresponsible authorities. If they do some proper research, they'll realize Chinese crooks love the country because of agencies like the Bureau of Customs, Commission on Human Rights, the Department of Justice and the National Bureau of Investigation to grant those crooks protection. Chinese poachers could easily hunt down Philippine turtles no thanks to the Department of Environment and National Resources. So really, did those blamers realize that irresponsible authority is to blame why Chinese crooks love the Philippines?

Because the blame game is so prevalent I guess that's why Noynoy won the presidency. It's probably why that even after the Noynoy Administration is over, there's still a high number of PNoy Pridists that are still heckling the important reforms of the Duterte Administration. I guess a lot of Filipinos choose to live in the culture of using Mr. Blame that's why they made Mr. Blame the president of the Philippines in the first place. I guess they're even blaming others for the failures of the Noynoy Administration on others like Gloria Macapagal-Arroyo or even the entire Marcos clan. One must ask a question like whether or not it was really Bongbong's fault or Gloria's fault that the expressway from Baclaran to Bacoor wasn't completed by 2016 both solar new year and Chinese New Year. But for these PNoy Pridists, their idol Noynoy can do no wrong and that every fault he has is not his fault but somebody's fault. Right now, some of them are even blaming President Rodrigo Duterte for all the vigilante or tandem killings which he didn't do. 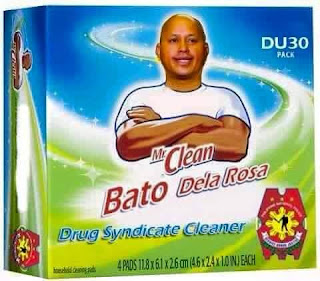 The solution is to really throw away Mr. Blame for Mr. Clean. While Justice Secretary Vitaliano Aguirre Jr. and PNP Chief Ronald "Bato" Dela Rosa aren't perfect but I can't deny that there's some improvements with their clean up programs. Justice Secretary Aguirre is inadvertently attacking his fair-weathered admirers who called him a hero when he covered his ears during the Corona Impeachment Trial. What Justice Secretary Aguirre is doing is correcting the mistakes of Senator Liar Dilemma and Mar Roxas. Besides, President Duterte said that the blame game will be a huge hindrance to progress. He's right to address that issue because the whole blame game goes nowhere. That's why the Noynoy years aren't the best years as PNoy Pridists would want us to believe.

So how can we use Mr. Clean to clean up the Philippines? Everything starts with delivering swift and appropriate punishments whenever people fail to follow simple guidelines. Do you remember the time when Justice Secretary Aguirre was charged with contempt? As wrong as his actions were, he should have just been asked to move out immediately without the chance to justify his actions. Then he could just be admonished the next day because while he was indeed guilty of contempt but one can't deny it was a minor offense. It didn't need a caucus to decide his punishment. Sad to say, Aguirre's case wasn't the real picture of what's wrong with the Philippines but the Senate. In the failure to implement swift and appropriate punishments to minor offenses it encourages a culture of impunity. If people were swiftly made to pay the fine for littering then they know that there's going to be penalties for their actions. But if they just continue to be allowed to think that it's draconian to give just and fair penalties for not following simple guidelines then that breeds impunity. Don't believe Raissa Robles' statement that martial law to implement curfew on minors or banning late night karaoke because it's all part of peace and order.

This also means one shouldn't confuse the right to have due process with the right to have Etta Rosales. While one must value due process but one must also think about it's all about protecting the rights of law abiding citizens and not the rights of offenders. Right now, a lot of crimes just go unpunished all in the name of "human rights" but where is the right of people to live safe and sound? The right of due process should protect law abiding citizens from any offense which includes the right to be protected from false accusations and not letting false accusers get away with just a slap in the wrist. But these days, many innocent Filipinos get punished for something they didn't do because of an incredibly lousy justice system that stands by guilty Filipinos no matter what and refuses to defend the innocent. After all, isn't it already a fad in the Philippines to keep protesting against other countries for lawfully punishing and/or executing Filipinos abroad who have really done something wrong?